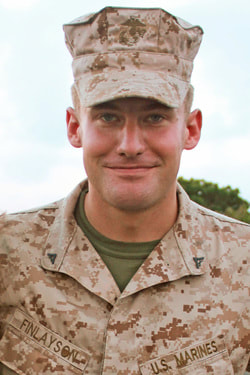 Gold Star Families are those who have lost their loved ones in military service.  I became a Gold Star Mom on November 7, 2013 when our son, LCpl David Finlayson, collapsed and died while on a five-mile training run with his battalion in Hawaii.  It’s still hard for me to believe that our strong and invincible 25-year-old son, in the peak of good health, could die from an undiagnosed heart problem.

It turns out that heart problems are much more common than I knew.  “On average, a seemingly healthy young person suffers a sudden cardiac arrest (SCA) every three days in the US and it’s the leading cause of death in exercising young athletes. In most cases of sudden cardiac arrest, cardiac abnormalities are not detected, there are no warning signs, and unless a normal heart rhythm is restored within minutes, death is the end result.”  (See www.nickoftimefoundation.org)

At first, they thought that David had an enlarged heart, which is a common cause of SCA.  But David had an athletic heart—big, but not defective.  His heart problem must have been electrical in nature—we may never know.   David had never had an electrocardiogram (ECG), which measures the electrical impulses of a beating heart.

Several months after David died, another Gold Star Mom learned about the Nick of Time Foundation and volunteered to help screen students for heart problems at Meadowdale High School in Lynnwood, WA.  Matthew Truax, a student there, had died of SCA at age 16.  Matthew's mom, Melinda, started the Heart of Edmonds School District and Community Heart Safe Project, with the mission of putting an AED in every school in the Edmonds School District and having emergency plans in place.  The Nick of Time Foundation was started by Darla Varrenti and her sister after Darla’s son, Nick, died of SCA.  They have screened over 20,000 students since 2006 and discovered heart problems in more than 500 of them.  Of those, 98% have been able to participate in sports again after treatment.  My husband, John and I have since met these amazing women who have turned their tragedies into non-profit organizations that save lives.  We wanted to bring the same kind of heart awareness to the military, so, in October 2014, we created the Lion Heart Heroes Foundation.

Through the Lion Heart Heroes Foundation we seek to keep military hearts beating by:Eventually, we hope that ECG screening will become part of the medical protocol at the Military Entrance Processing Stations (MEPS).  Then these undiagnosed heart problems can be discovered before young recruits join the service, giving them the opportunity to get their hearts fixed.

Every military member deserves an ECG and the chance to prevent a life-altering or life-ending event.

Will you help us?